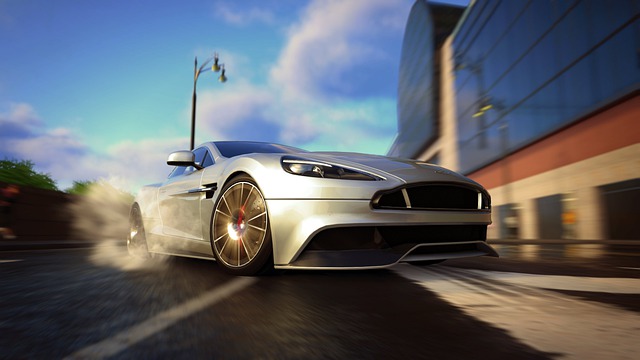 Fastest production cars in the world

Credit to Karl Benz for inventing the first automobiles to the vast number of production companies lately, the demand for faster speed has recently proven constant as they evolve. It has always been a significant factor in comparing autos, interestingly being a bone of contention for many.

Contrarily, at the outset of cars’ first production, speed was hardly a vital requirement to own one. The relief from being less restricted to steel routes in railways to literally any space was a welcome development.

The first cars ran on steam-powered engines and were as slow as 20 miles per hour. This risibly doesn’t even match a modern lawnmower at its top speed presently. But at the time, they were highly lauded for being “that fast,” referred to as “high tech.”

Today, speed has arguably been essential in determining the best cars, aside from aesthetics, comfort, fuel economy, among others. Bugatti and Koenigsegg have recently broken speedometer records, but new cars’ continuous emergence has fueled the competition.

Regarding velocity as the sole criterion, let’s put the endless debate to an end by ranking the fastest production cars in the world ascendingly. 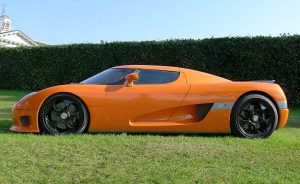 Claimed in 2005 to be the fastest production car in the world, Koenigsegg CCR is more deserving of a spot in the meticulous ranking. Koenigsegg CCR recorded a top speed of 242 mph (395 km/h), which remarkably still stands the model out to date. It takes just 3.2 seconds to accelerate to 100 km/h (62 mph) from rest.

Several innovative yet admirable features made it as speedy as it was most considering its early year of production.

Its 4.7 L Koenigsegg twin-supercharged V8 provided up to 806hp, far more than previous cars from the manufacturers. The 2-door Targa top auto also conspicuously differed from its preceding model CC8S in design. From the front splitter to the rear wing, brakes, tires, wheels, plus its chassis and suspension, its stunning racing car-like design enthused every racing car fanatic.

In 2005, its manufacturers claimed it broke McLaren F1 for the world’s fastest production car. It was in production for only two years, from 2004 to 2006 with only 14 units made & sold in the duration.

With its top speed of 250.4 mph (403 km/r), the sports car has proven to be one of the fastest production cars in the world. McLaren Speedtail accelerates at 16.67 km/h2 from test by Auto Car Magazine, taking only 9.2 seconds to attain half its top speed.

The 2020 limited-production hybrid was and is still designed and manufactured by McLaren Cars. Experts at the English manufacturing company powered it by a modified M840T from the 720S and a hybrid powertrain to generate 1,036 hp. The aerodynamic nature, cutting-edge battery tech, electric motor, and low weight are other attributes responsible for its pace.

McLaren Cars have notably been one of the top-speed car manufacturers for over two decades now. The company earlier set the Guinness World Record for the world’s fastest production car in 1998. Broken with the XP5 prototype, it outpaced the modified Jaguar XJ220’s 217.1 mph when it reached 240 mph at top speed.

McLaren boasts of at least eight Formula One Constructors’ titles, only behind Ferrari and Williams with 9 and 16, respectively. Some of their top F1 riders responsible for 15 drivers’ wins include Mika Hakkinen, Alain Prost, Ayrton Senna, and multiple award-winner Lewis Hamilton. 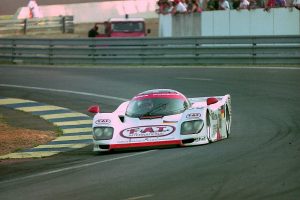 The sportscar dominated motorsports for a long, breaking both individual and world records. It won the Sportscar Championship in 1985 and 1986, bossing group C for nearly a decade of racing.

It was later modified to meet road regulations for domestic use. The modifications included:

But despite the numerous modifications made, hardly any car could beat the Dauer 962 aesthetics. 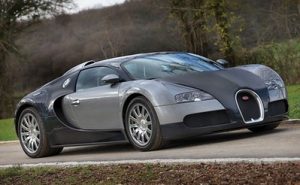 With top speed oscillating around 253.8 mph (408.5 km/h) the sports car has proven to be one of the fastest production cars in the world, Bugatti Veyron 16.4 broke McLaren F1’s top speed record in 2005.

Veyron EB received a plethora of accolades for its speed, including the Top Gear’s Best Car Driven All Year Award in 2005. BBC television program, Top Gear also named it the Car of the Decade and best car award from 2000 to 2009.

Bugatti Automobiles manufactured about 252 units of the Veyron EB between 2005-2011, which still holds the record for the highest number of Veyron units produced to date. 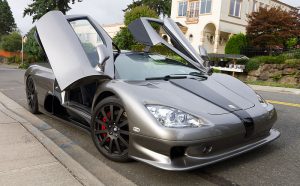 Its atypical name consisting of “Aero”, speaks for itself of how aerodynamic its designers intended the supercar to be. The whole car weighs no more than 60kg despite its advanced sophistication all-round.

The SSC’s body is made entirely of carbon fiber, featuring a flat undertray with double venturi tunnels. Within the tray is a steel box-sectioned chassis. Front suspension is typical twin wishbones, unlike the rear that features an upper rocker arm with a lower wishbone & an anti-roll bar.

The SSC’s regular upgraded models were among Veyron’s significant competitors between 2004 to 2009. Purported top speed and multiple yet fun-to-watch drive tests continuously ensued in attempts to claim the world record, which it did from 2007 to 2010. 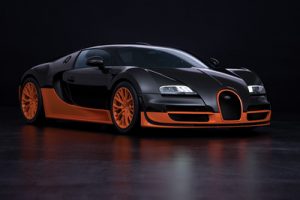 Bugatti only produced 48 units of the Super Sport car between 2010 and 2011 and focused on the Grand Sport Vitesse, being its successor.

It was, sadly, stripped off its Guinness World record for five days in 2013. Claims that its Super Sport model that broke the world record wasn’t the exact one sold to the public was the reason behind it as its speed was electronically limited to 258 mph from 267.8 mph for on grounds safety. But the Super Sport was reinstated as the record holder after series of investigations. 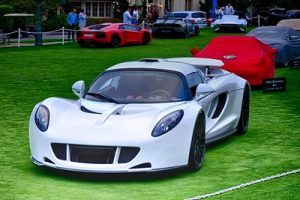 In February of 2014, the high-performance sports car set a new top speed record at 270 mph (435.31 km/h), as its manufacturer, Hennessey Performance Engineering, claimed. Although a test performed on the 3.2-mile Space Shuttle landing runway of the Kennedy Space Center proved it.

Its previous model set a Guinness World Record for the fastest road-legal car prior to the Venom GT speed test, taking only 13.63 seconds to accelerate from rest to 186 mph (300 km/h).

Between 2011 and 2017, only 13 units (6 Spyders and 7 Coupes) of Venom GT have been manufactured, keeping their promise to produce only a “handful” of them. The model preceded Venom 1000TT, with Venom F5 being its successor, which its producers eventually focused on. 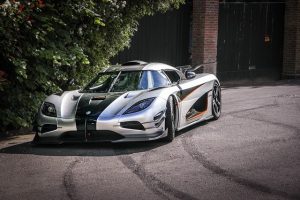 Koenigsegg Automotive, who aren’t strangers to record-breaking with fast production cars, made headlines again after setting a new world record in 2017. Beating their earlier CCR model among others by different manufacturers, the Agera RS recorded a top speed of 285 mph (458 km/h) on a straight-line drive and 278 mph (447 km/hr) on a GPS-verified two-way lane.

Built with pre-impregnated carbon fiber, Agera RS variants hardly weigh over 70kg. The quest for lightweight is also implemented in the integrated fuel tanks made for weight distribution in the car chassis also made from an aluminum honeycomb.

Its staggering aerodynamic design featuring aluminum 19-inch front and 20-inch rear wheels also make it so fast yet powerful. Interior features from the adjustable pedals to the power windows make it more stunning, as its unique aesthetic nature is most appealing. 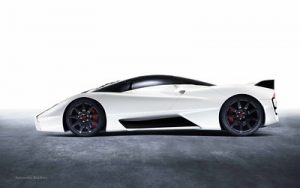 The ssc tuatara comes 2nd place in our list of the fastest production cars in the world. Although Tuatara manufacturers claimed the sportscar broke the fastest production car world record tremendously at 331.15 mph (532 km/h), independent analysts challenged the figure. British veteran rider Oliver Webb drove the car on a seven-mile closed road outside Las Vegas, United States. Still, after SSC’s founder, Jerod Shelby, uploaded a Youtube video highlighting mistakes in the race, it had to be re-run.

Ranking 1st on our list of the fastest production cars in the world is the bugatti chiron super sport 300. Bugatti Automobiles has also relished global praise for manufacturing Chiron, the model succeeding Veyron. British sportscar driver Andy Wallace rode the sportscar at the VW Group’s Ehra-Lessien test track in Germany, where its peak speedometer reading was 304.77 mph (482.8 km/h).

Chiron Super Sport is powered by a 1,580 hp (1,175 kW) quad-turbocharged W16 engine nicknamed “Thor” for the stunning figure. The highly powered machine is most responsible for its record-breaking acceleration, taking just 41.96 seconds to attain 400 km/h.

A statement from the manufacturers read, “We have shown several times that we build the fastest cars in the world. In [the] future, we will focus on other areas.” Numerous accolades in the past aside from breaking 300 mph definitely backed the statement, but independent sources haven’t verified such claims.

Since production began in 2019, at least 30 units have been designed, manufactured, and sold. The company first presented the sportscar in their 110th-anniversary tour in Europe.

Calculating and comparing the fastest production cars seemed somewhat arduous owing to the absence of a standardized method of authorized authority. These difficulties led to unverified claims by top manufacturers, including the Tuatara, Chiron Super Sport, Venom GT, Koenigsegg CCR, and 962 Le Mans sportscars. Although it meant the Guinness Book of World Records needed to snub them, they are undeniably still among the fastest since the dawn of time.