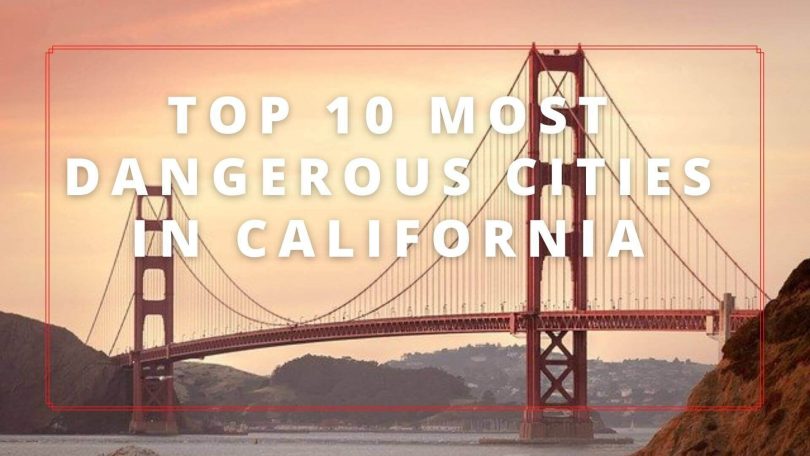 The most dangerous cities in California

There are many cities in America, each with different rules and a different human set of people with different mindset. These laws and regulations can lead to the variations of illegal activities in different regions.

Analyzing the states, California has led the country to reduce the number of people in prison over the past decade. The patterns of crime between places are vary greatly.

You may not know the current situation if you live in California, last year, 31 of the 58 state counties experienced an increase in violence, and 22 an increase in property crimes, while the others remained flat or declined.

According to figures released by the State Attorney General, the most violent cases against property last year continued to decline.

Ranking from the lowest to the highest these are the most dangerous cities in California:

San Bernardino may not be one of the state’s largest cities, but it is one area with the least community safety. There are 217,986 people in total in San Bernardino, and there is a possibility for violent and property crime 1 to 77 odds, this is because the region does not have strong police protection and laws.

For years San Bernardino has been ranked as one of the poorest and most dangerous cities in the california, with high crime rates. If in this city you still want to stay, District Scout says Devore Heights is the best place. There are also other safe places such as devil’s canyon road, del rosa, ajon and arrowhead springs.

It is a dangerous, boring place and a very bad city without hope, Barstow is actually three times more dangerous than the average state, much higher than the national average itself.

One in 25 people in Barstow is robbed every year. What else? Its water is contaminated with rocket gasoline from a nearby military base. Barstow could put his hat mentioned in several notable films, including the Fear and Loathing in Las Vegas and the Hangover trilogy.

Although Santa Monica still has a chance to become a victim of property crime, but its crime rate has dropped steadily in both cases over the years. Hopefully, in future years to come we might see santa monica crime rates drop. But now they still remain the 8th most dangerous city in California.

Red bluff is so dangerous that residents living in this city are prone to various forms of crime, 12 to 13 out of 100 people are likely to be victims of property crime. The level of violent crime has also increased by almost 30% between 2017 and 2018.

Eureka is another small town with a fearsome reputation, you probably expect the city to be quiet with about 27,000 people. Eureka, however, has the highest crime rate in California, and 1 in 13 people in the city is likely to suffer.

In California, 30 miles north of Sacramento, between 2017 and 2018, Eureka encountered an increasing level of violent crime. This linked figure has the potential for one in 137 people to be victims of violence and one in 18.2 to be victims of robbery or arson in 2018.

Signal Hill is a town based in downtown Los Angeles County, California, located at the top of a hill and completely surrounded by Long Beach City, the city is an enclave.

You have a chance to be the victim of a traumatic attack on 1 chance in 100. Murder, rape, robbery and assault are among the most violent crimes committed. By knowing about property crime, you have a one in 16 chance of being abused.

Although crime rates have dropped dramatically in recent years, violent crime remains a major problem in the city.

Oakland is the eighth-largest city in California but the most violent. The city has also been linked to the number of homicides in the USA in terms of official murder records (70 in 2018).

Of the 78 percent of the population, victims of assault in Bump city, that has gradually increase is ridiculously high, there is a high chance of Oakland residents  being a victim of violence.

Property crime in the city is on the rise, which means that in the future, we may see Oakland at the top of the list. You may wonder why anyone would live in this city with such high crime rates.

Commerce is a city in southeastern California, Los Angeles County, United States of America. Ironically, Commerce calls itself the “Model City” but is also one of the safest cities on the list.

But this town in the south east city of Los Angeles is highly criminalized. The good news is that in recent years violent crime has dropped by almost 30%, and property crime has dropped slightly in 2018 to 1 in 13.

Many people go to the harbor to enjoy the township and to see the beauty of the city, but every year in San Francisco, people in the city are one in 18 victims of all kinds of crime, this is much higher than the national crime rate in the United States (4.9 per 100,000). Tenderloin County has the highest crime rate, and the whole city is battling with homeless people.

Emeryville tops our list on the most dangerous cities in California. It is a small-town northwest of Alameda County in California and bordered on the San Francisco Bay River, in the corridor between Berkeley and Oakland.

Perhaps many people will be surprised to see Emeryville as the most dangerous city in California, but this city has been at the top of the FBI’s report (report analysis topped in 2015, 2016, 2017) and it’s also the smallest city on this list near northern Oakland and east of San Francisco.

People face high levels of property crimes at the risk of one per 6 residents (9 times larger than Los Angeles). Fortunately, between 2017 and 2018, violent crime decreased by 37%, but one in 70 violent incidents still occurs. The level of violent crime in general or the rate of murder is “normal” compared to other cities.