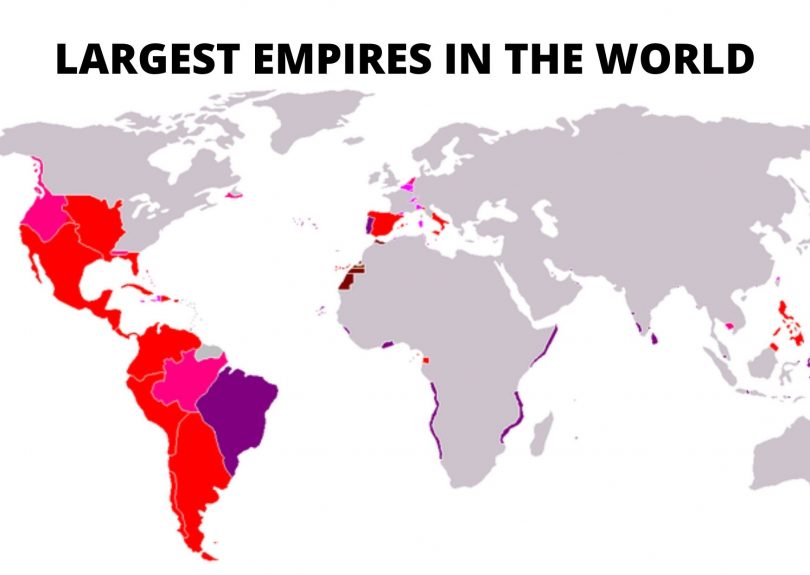 Hundreds, if not thousands of reigning empires that even history books couldn’t utterly account for existed, but which of them can we assume as the largest? No matter how pragmatic replies to this inquiry may tend to seem, every empire’s uniqueness makes them somewhat subjective.

From the daunting age of Sargon, the Great, to the more recent Soviet Union, geopolitical and commercial peaceful coexistence hardly ever thrived in historical times. The endless quest for power instigated many battlefield duels as most empires yearned to gain dominance over others. But with these empires significantly obliterated at the dreaded World War II’s end, the rise, fall, and merge of many was a notable feature of this leadership system.

But with many factors in consideration, here are some of the largest empires in history.

Once being part of the Angevin Empire in medieval times, Britain, the mother country of the fast-growing British Empire, also established overseas colonies. By the end of the 17th century, colonies in the West Indies and America were among the most notable ones in their control.

In mid 18th century, the British had gone into many wars, including the infamous ‘seven years’ war against the French, which saw them take over Canada, Saint Vincent, Grenada, the Grenadines, Dominica, and Tobago. They also took over other French colonies, including Acadia and India being victors in the Battle of Plassey.

But, towards the end of the century, they lost leadership over America after Spain, France, and the Netherlands took the American side in the Revolutionary War. The eight-year spanning battle made America among the fewest nations to ever fight & win colonial rule seeing George Washington afterward as President.

As late as 1938, with 458 million people under their control, the British Empire had over 20% of the world’s population. They also covered as much as 22% of the earth’s landmass at about 13 million square miles. They were among the largest empires in history, but like all other preceding ones, their reign had to come to an end someday, and financial strain after World War I paved the way. The loss of Ireland, India, and African countries who felt that they earned rightful independence after donating troops for World War II finally brought the British Empire to an end in the mid-90s.

At the start of the 1800s, the Tsarist Empire, also known as the Russian Empire, was one of the largest the world had ever seen. It was over 176 million populated in 1913 and comprised at least 20 different nationalities within. It covered over 9.2 million square miles and lasted for nearly 200 years.

In contrast with most of the world then, the union used the Julien calendar over that of the Gregorian, which was 13 days slower than the latter. And unlike the British Empire that had countless overseas territories, the Russian Empire was hardly in charge of any colony far from their base. But in their time, they were still undeniably one of the five most powerful empires in Europe.

Before the Russian Revolution in 1917, which brought the Tsarist Empire to a close, the Tsars, where historians coined the nation’s name, were in authority. The civil service, army, and Orthodox churches supplemented the Tsars governing effort.

Senior officers of the formidable army were outrightly loyal to the Tsar. But low-ranked officers suffered poor living conditions, low pay, among other harsh treatments. The Orthodox churches, by their teachings, were very influential in the natives’ lives, and they coaxed them into believing that God appointed the Tsar. Most citizens were illiterates compared to other individuals in Europe, and they regarded the church’s teachings as a significant source of education. But growing skepticism saw the citizens disrespecting the church’s priests, who were perceived corrupt due to the financial dealings they had with the Tsar for their teachings.

The Tsarist empire may not have had the wealthiest or most educated people, but facts and stats initially highlighted make them, without doubt, one of the largest empires in history.

Dated far back to the 13th and 14th centuries, the Mongol Empire was the second-largest nation in history, only after the British empire. As recorded, favorable wet weather in Asia bolstered the Mongols military strength for battles as vegetation and livestock production increased. The Jurchens, who were leading pioneers of the Jin dynasty, took control over former Liao territory and defeated the Mongols to take over governance with the Tatars in 1161. By conquering one province after another, the empire stretched to Central Europe and the East sea, covering westward regions as far as the Levant, eastward and southward into the Indian subcontinent.

Genghis Khan was one of the most prolific leaders of the Mongol Empire, credit to The Empire’s rapid growth during his leadership regime. Moreover, in various ways, his era led to more ideological and technological advancement.

Dispute by Genghis Khan grandchildren was more or less the beginning of the Mongol Empire’s end. Their disagreements about who was to succeed were never resolved, and it ensued in the civil wars in the once peaceful Mongol Empire. The Mongols suffered from occasional battle defeats afterward, and although they were victorious in few, the Empire divided into four in 1304, each chasing its own goals. In the end, Russia invaded and took over most Mongol Empire regions.

Past renowned leaders from the early times to some hundred years back prioritized the cynical art of conquest. The obsession was one of the only meaningful leadership tasks they had as they rarely even catered for their citizen’s necessities, let alone secondary demands.

While a few like the British Empire that was initially nullified turned into a voluntary association known as Commonwealth, the relics of some others are hardly in anyone’s range of recollection.