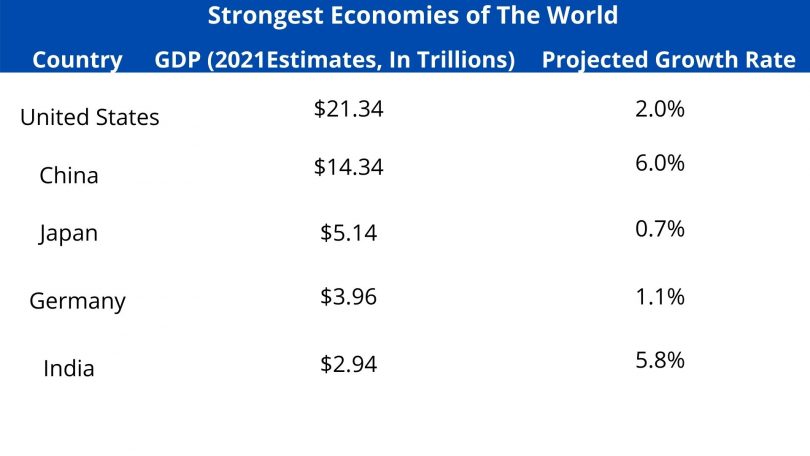 Strongest Economies of The World

When last did your residing country go into recession? A long time ago for some, but contrastingly more recent for European residences. The blatant effect of the novel pandemic on countries’ economies was always negative, although in different intensities. It lowered trade volumes, slashed energy prices, impeded and eventually halted tourism, among others that caused even the strongest of nations to almost record declined GDP from previous years.

Among the top countries, it significantly affected was China. With a promising growth rate at the end of 2019, the pandemic shattered hopes of a bright future soon.

Although the US also had a fair share of the pandemic’s disturbing impact, they still hold their title as the wealthiest country since the 19th century from GDP output. With the United States still leading the pack after considering the necessary criterion, below is a ranking of the strongest economies of the world.

Against all odds, The United States tops our list of the strongest economies of the world. This country still boasts of the largest economy from their nominal GDP output. With a growth rate of 2.2% from 2019, some of the most significant contributors to the jaw-dropping value include health care, real estate, finance, and business services.

Generally, traders consider the United States Dollar (USD) as one of the safest currencies and always attempt to savor it to hedge against financial uncertainties, especially in financial trying times. That’s among the reasons why it constitutes the major forex pairs like the USD/JPY, GBP/USD, and EUR/USD pairs bolstering its value and the US’s overall economy in the process.

Moreover, major exports offer over 12% of the United States GDP. Some of the exportable products include aircraft, cars, vehicle parts, human/animal blood, Soybeans, telephones, and petroleum which provide the largest worldwide supply.

The People’s Republic of China has the second strongest economy worldwide in terms of GDP output. Despite facing challenges emanating from its fast-rising population demands and severe environmental degeneration, they still boast of a higher PPP and economic growth rate at 6.1%. Most economists predicted they would surpass the US sometime in the future before the pandemic.

China has invested so much in agriculture over the years, accounting for roughly 10% of its GDP. It is much more than other developing countries where agriculture doesn’t have such a significant impact. Besides, China is among the top contributors to futuristic development globally. From mobile manufacture to gaming, streaming services, and supplements to 5G development, the Chinese outrightly involve themselves in the tech industry.

For many reasons including, some aforementioned, China is the world’s number one exporter. Their policies encourage domestic manufacturing, and most exported goods are electrical machinery, plastics, vehicles, medical apparatus, future & beddings, and games.

They have also notably recovered from the scourges of the slight COVID-19 recession, unlike most other nations.

Trailing the wide gap set by her fellow Asian country, Japan has the third strongest economy worldwide. They have the second-lowest 2019 GDP growth rate among the top 5 countries, which is 0.7%.

Japan is home to over 250 companies including, world-renowned automobile giants such as Honda, Nissan, Mitsubishi, and Toyota. They contribute hugely to the industrial sector of its economy. According to Statistics, the sector makes up 29% of the GDP output, second after the service division.

Japan’s service sector, which accounts for more than half of the GDP value, comprises retailing, banking, insurance, real estate.

Most affluent companies globally, including TEPCO, Nomura, and Japan Airlines (one of the largest airlines worldwide), provide the avenue for these services.

Struggling with a rapidly aging population, Japan has strived to keep more citizens active due to the foreseen effect that may prove dire to the economy. They also have one of the lowest unemployment rates, which is just 2.3% of their employable population.

Similar and dissimilar with Japan’s GDP makeup & woes in some ways, Germany boasts of the largest economy in Europe and 4th in the world. Germany’s PPP value is estimated at $4.7 trillion with 0.6 GDP growth in 2019.

Industry and services are the two major sectors that contribute most to the GDP. Their highly skilled workforce makes them a top exporter of vehicles, chemicals, machinery, etc. We also can’t help but notice the country’s tremendous influence in the global stock market, thanks to companies like Adidas, Deutsche Bank, SAP, and BMW, which make up the DAX30.

Apart from their success in the stock exchange, the German treasury market is another reason for its thriving economy. Its government bonds & debts securities mature anytime from 10 to 30 years and are considered long-term and medium-term bonds.

A common challenge to Germany’s economy is its fertility rate. There isn’t a proper balance between their fertility and mortality rates, with the former being considerably lower than expected. It doesn’t give the best omen as to replacing its declining workforce, and its surging levels of immigration strains its social welfare system.

India, having the second largest population on earth, is the 5th richest in Nominal GDP output. On PPP ranking, which some economists consider the principal factor in determining a country’s wealth, they are the third, only behind the United States and China. India’s 2019 GDP growth rate was 4%, and with nominal GDP per capita at $2,100 owing to their population, it is the lowest on the list.

With over 60% of India’s population working in the agricultural sector, it contributes a staggering 15%+ to the GDP value. Their most abundant farming produce includes fruit, vegetables, cotton, sugar cane, cattle, wheat, seafood, fruit, and milk. Globally, India is also among the primary exporters of crude oil, natural gas, coal, cement, automobiles, textile, and natural resources.