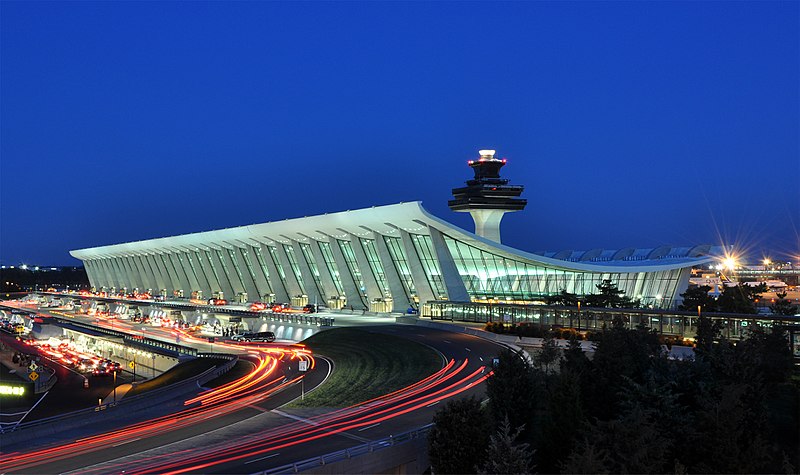 Largest airports in the world

With the exponentially growing demand for air travel, top airports globally have most recently been overwhelmed with the influx of passenger traffic. The need to accommodate more individuals has proven dire and led to expanding or constructing larger ones.

This increase in size evolution can’t be more beneficial to prospective passengers and their owners themselves. But it’d be fun to rank the ten largest airports in the world by land area. 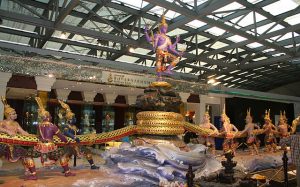 Also unofficially known as Bangkok Airport, the international airport is one of two in Bangkok, Thailand. It is one of the biggest in Southeast Asia and unarguably the largest in the country, covering 32.4 sq km (8000 acres).

Since its initial launch in 2004, Bangkok Airport has been the hub for Bangkok Airways, K-Mile Air, Thaiviejet Air, Thai Smile, and Thai Airways. It fully commenced international flights in September 2006. Lufthansa Cargo from Mumbai, India, was the first flight to grace the runway from abroad, while a Saudi Arabian airline was the first cargo departure.

The airport’s overall stunning design, credit to Murphy/Jahn Architects, is a significant reason it was the most popular global venue to take Instagram photos in 2012. 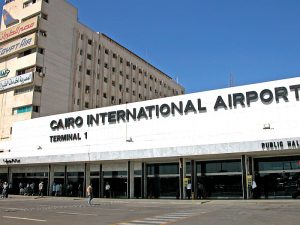 Covering 36.25 sq km, there isn’t any larger airport than Cairo International Airport in Africa. The Egyptian airline is also the busiest in the country, as it handled over 17 million passengers in 2018.

Cairo airport is the primary hub for EgyptAir and Nile Air.

Cairo International Airport was initially built with four terminals for both private and non-commercial aircraft services. But during an upgrade, the third (and largest) terminal, International Hall 3, was demolished due to reconstructing a new hall for international arrivals.

The numerous facilities occupying the 14 sq mi area include the AirMall, the luxurious five-star Le Meridien Hotel, a multi-story, and a multi-story car park.

In 2010, Cairo International Airport was one of the three most improved airports by the Skytrax World Airport Awards. It then laudably became the second Best Airport in Africa of the Airport Service Quality Awards by Airports Council International a year later. 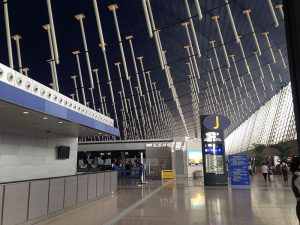 Shanghai Pudong International Airport is an international airport covering 39.88 sq km in Pudong, Shanghai. It is the second-largest in China and 8th on this list of the largest airports in the world, with a mind-blowing passenger record of 84 million in 2018.

Despite not being the biggest, Shanghai Pudong airport is disputedly the busiest international hub in China. By cargo traffic, it was the world’s third most active in 2017, handling 3,703,431 tons. Pudong airport hosted at least 104 airlines in 2016, with more than 210 destinations served. By passenger traffic at the end of 2018, the airport was the fifth-busiest in Asia and eighth busiest in the world.

To increase annual passenger capacity in 2021, the government opened a third passenger terminal with a satellite terminal and two more runways. It initially had four operational runways on both sides of two passenger terminals, but it proved insufficient for the fast-growing hub.

Pudong airport’s continual upgrades may see it surpass others in the ranking soon, but presently, it remains the eighth largest by land area. 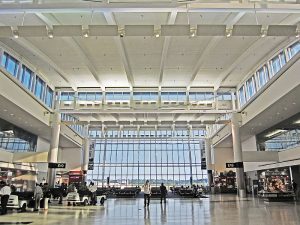 George Bush Intercontinental Airport, located in Houston, Texas, is the fourth largest airport in the US and seventh on this list of the largest airports in the world. The local and international airport covers 44.51 sq km (11,000 acres).

George Bush Airport is a significant hub for Atlas Air and United Airlines. With 130 access gates made available, there are five passenger terminals. There are also five utilizable concrete runways for aircraft in different directions averaging 10,080 ft in length.

In 2019, the airport served 45 million passengers, which trickled down to 24.6 million in 2020 due to COVID-19’s pandemic effect. Regardless of its immense size, George Bush airport isn’t among the ten busiest of its kind in the country.

It contains a 573-room hotel – Marriott, accessible through the landslide inter-terminal train situated between Terminals B and C. Other facilities contributing to its large area include a conference center, coffee shop, sundry shop, health club, restaurant, bar, and concierge lounge. 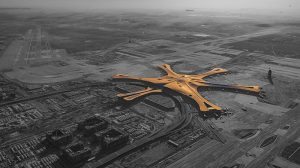 Beijing Daxing Airport quickly made noise to the world after its grand opening in September 2019 ranking 6th in this list of the largest airports in the world. The star-shaped airport, as well as other amenities, covers 47 sq km.

The airport, which reportedly cost $11.4 billion to construct, took nearly five years to complete. It began operations on September 26, 2019, although it had been ready since June 30.

Its 7.5 million sq ft terminal is the largest single terminal building in the world.

Yet to celebrate its second anniversary, Beijing Daxing Airport has already received the award of being the best of its kind by hygiene measures in Asia-Pacific. The Airports Council International awarded it in 2020. 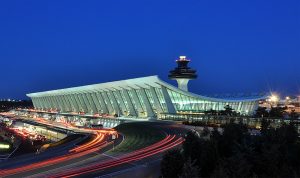 Washington Dulles International Airport is a domestic and international airport named after John Dulles in Dulles, Virginia. Simply referred to as Dulles, it covers a 48.56 sq km area, making it the third-largest airport in the US and fifth in the world.

Although it is the hub for only United Airlines, dozens of non-stop international flights pass through Dulles every day. Records have shown that it has the most international passenger traffic outside the New York Metropolitan area in the Mid-Atlantic. It only ranks behind Baltimore/Washington International Thurgood Marshall Airport in total passenger boardings annually.

In 2020, Dulles served about 8.3 million passengers and handled 197,917 cargo transfers, according to the Federal Aviation Administration. It also managed 151,472 aircraft operations in total.

Dulles Airport has three terminals – the main one and two parallel terminal buildings. Passengers can board or disembark flights through the 123 available gates at the entire complex.

Dulles has four concrete runways of slightly varying lengths and a non-concrete one. 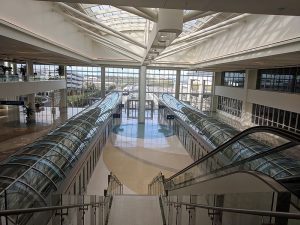 Have you ever dreamt of visiting Disney World? Orlando International Airport will definitely be your last aviation stop if you decide to go all air. As its name evidently implies, the airport is situated in Orlando, Florida. Its former name McCoy Air Force Base, is the reason behinds its “MCO” airport code.

After handling 50.6 million passengers in 2019, it became the busiest in Florida and tenth-busiest in the US. It is mainly a hub for Silver Airways, an operating base for Spirit Airlines, Southwest Airlines, and JetBlue Airways, and also a focus city for Frontier Airlines. United Airlines also utilizes the airport’s spacious area for aircraft maintenance.

One hundred twenty-nine gates open to five terminals at the airport. The main terminal is divided into Terminals A and B, where baggage claim and passenger check-in facilities are both. They also both share two security checkpoints. Multiple architects, including Helman Hurley Charvat Peacock Architects, KBJ architects, and Rhodes + Brito Architects, were all involved in the entire design. 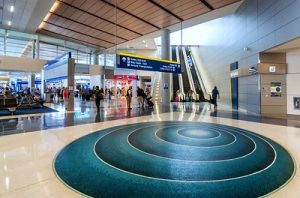 Better known by its airport code, DFW, it covers a staggering 69.63 sq km of both Dallas and Tarrant counties in Texas, US. It is so broad that it has its postal ZIP code as they even consider it a city.

It is a significant hub for UPS Airlines, American Airlines, and Ameriflight airlines.

In 2019, DFW airport was named the third busiest airport globally by aircraft movement and the tenth busiest airport by passenger traffic. It is also the second most active international gateway in Texas and ninth in the country.

In January 2020, DFW commendably joined a short list of global airports serving over 200 destinations. It serves 193 local destinations in the US and 67 international ones, bringing its total to 260.

DFW has six concrete runways and an asphalt one in different directions. Designed to minimize the distance between the car park and plane, five terminals are also available for passengers with 184 gates opening. 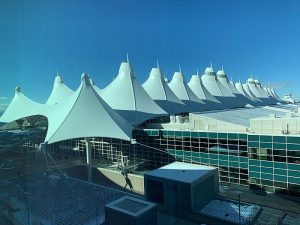 Ranking 2nd on our list of largest airports in the world is Denver international airport. As broad as 135.7 sq km, it is also the largest airport in North America. It is located far from residential areas in Northeast Denver, Colorado, to avoid aircraft noise and accommodate an ample space.

Denver airport is among the primary hubs for United Airlines and Frontier Airlines. It currently offers service to 215 worldwide destinations amongst 23 different airlines. With 35,000 employees, it has the highest in Colorado and significantly one of the largest compared to other airports.

DIA has only one terminal but three midfield concourses. Passengers can access the first course, A, via a pedestrian bridge that directly links it from the terminal building or an underground train system that also accesses B and C courses. They have 51, 66, and 29 gates, respectively.

Seven concrete runways are available for aircraft at DIA. Runway 16R/34L, approximately 16,000 feet long, is the longest runway in North America and seventh in the world. 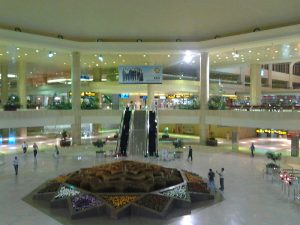 Ranking on our list of the largest airports in the world is the King Fahd International Airport, DMM, the largest of them, covering an unbelievable 776 sq km area.

DMM is located in Dammam, Saudi Arabia, and is the hub for SaudiGulf Airlines, Flynas, Saudia, and Aramco Aviation. It has two runways of 4,000 miles and a terminal area of 3.52 million square feet.

Although it is exceedingly large and built to handle 12 million annual passengers, it hasn’t recorded such annual passengers yet. In 2016, DMM served 9.6 million passengers. It was a significant improvement from the previous year, increasing by 3%.

Like most other public structures in the nation, the airport houses a mosque built at the car park’s top. It is accessible from the passenger terminal via two enclosed bridges and one open one. The mosque can hold 2,000 worshippers at a time.

The airport also has a plant nursery that supplies its gardens with trees and plants. It covers 2.3 million square feet and contains three greenhouses and a long stretch of green fields.

DMM isn’t as busy as most of the others, it currently tops in the list, but its enormous size makes it more than deserving of a spot in any ranking.

Although larger airports can mean fewer queues and more time saved for passengers, they can also mean the opposite for busier ones. If the annual passenger growth rates keep surging, there are low chances of travelers relishing its size advantage. But regardless of the potential downsides among all its ups, it’ll always be a welcome development for all.